Over 5,400 visitors and participants took part in Beaulieu’s vibrant Hot Rod and Custom Show, with a busy line-up of impressive customised cars and bikes, dancing, music and trade stands making it an enjoyable Father’s Day out for all the family. 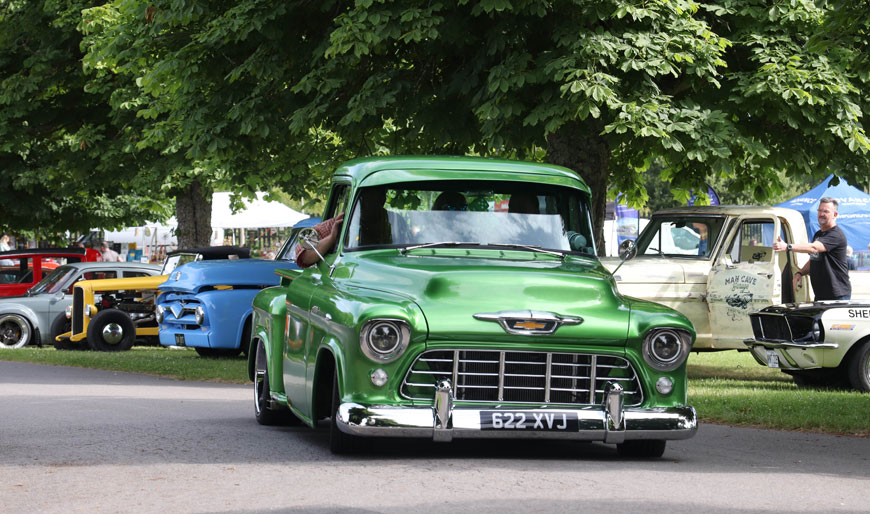 Show-goers were spoiled by rows of colourful machines at the busy show, held in association with the Solent Renegades club, on Sunday 19th June in the grounds of the National Motor Museum. More than 350 eye-catching motors parked up in the showground, ranging from cool customs and powerful bikes and trikes, to awesome rat rods, huge American motors and all manner of pre-1980 classics. 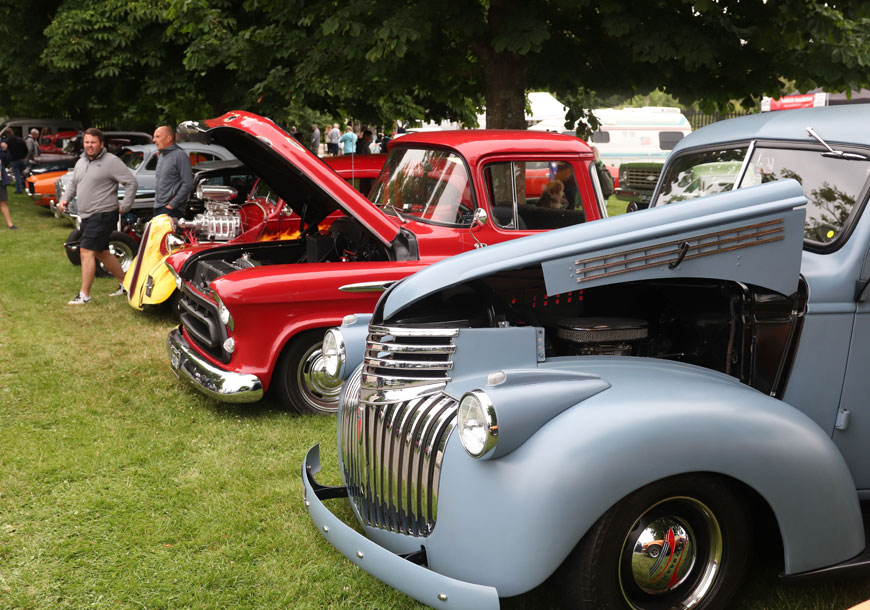 Show ambassador and famous custom car builder Andy Saunders arrived in style in his 1937 Cord Westchester Tetanus, before spending the day talking to other custom car owners and enthusiasts about car builds of the past, present and future. He then selected his favourite car of the show, as part of the presentation of awards for the most remarkable vehicles of the day. 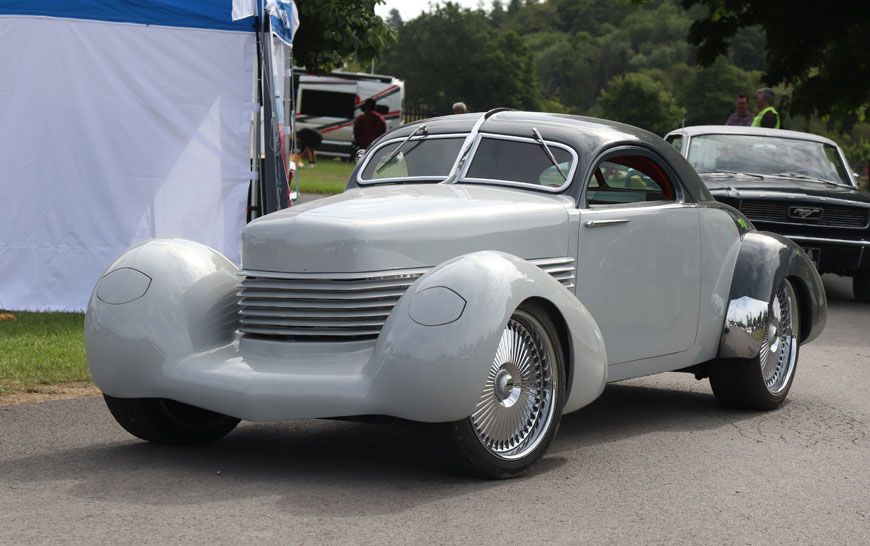 Winning the Andy Saunders Award was Mike Wareham from Bournemouth, with his distinctive 1968 Volvo Amazon estate. Mike said: “I’m over the moon with the award, chuffed to bits. It was scrap when I bought it, so I’ve rebuilt it with a Mazda MX-5 engine and air ride suspension.” 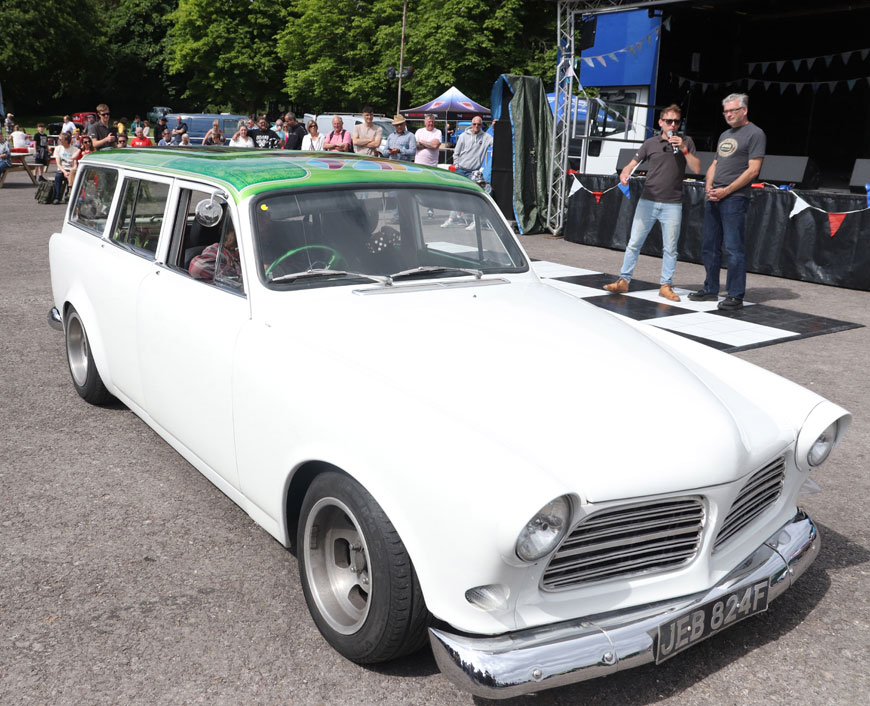 Andy said: “This custom Volvo is a very pretty car, and was built on a low budget. For anyone wanting to build a custom, it’s achievable and very affordable. There’s so much work that has gone into it, such as the recessed door handles and the ‘frenched’ front sidelights – all these little bits make it look like a West Coast custom. If it inspires somebody else to build their own custom car, then it deserves to be applauded.” 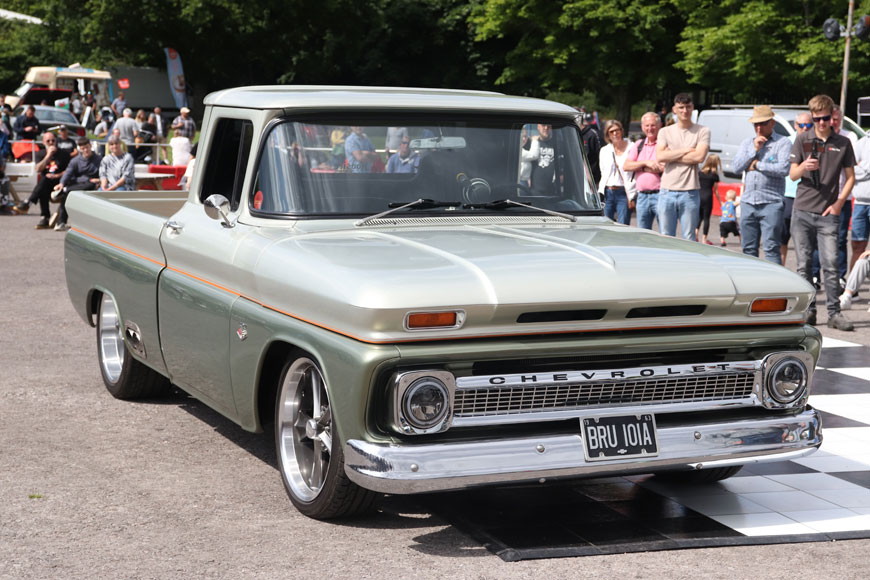 The Best in Show Award went to the 1963 Chevrolet C10 Fleetside pick-up of Michelle and Martyn Marsh from Frimley, which turned many heads as it rumbled into the show. Presenting the award to Martyn, the Chief Executive of the National Motor Museum, Dr Jon Murden, said: “What an amazing truck this is, from its colour to the look of its huge wheels. I haven’t even looked at the mechanical specification, although I certainly heard it! It’s so hard to judge the Best in Show, but this is a very worthy winner.” Martyn said: “The Chevy is named Brutus, thanks to its big-block 7-litre engine. With 550bhp, it’s very quick!” 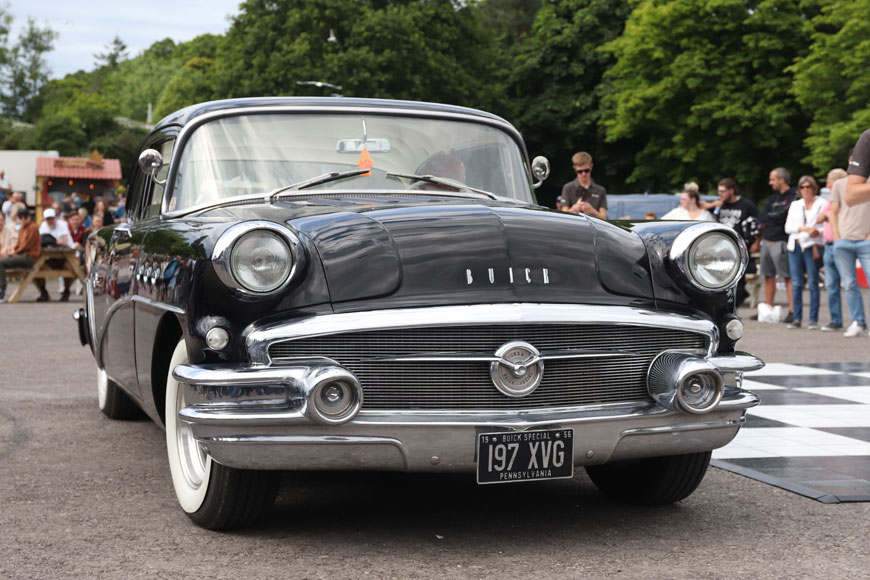 The Solent Renegades Best American Award was presented by Malc Nichols of the club to David Southcott of Hastings for his gleaming 1956 Buick Special. David said: “I’m very pleased, I’ve only had the car for a year. This is my second year coming to the Hot Rod and Custom Show. The car was a mess when I bought it, I’ve spent all my time on it, every minute that I have!” Malc said: “It’s been the hardest year to choose the winner of the Best American award, the competition was so tough this year.” 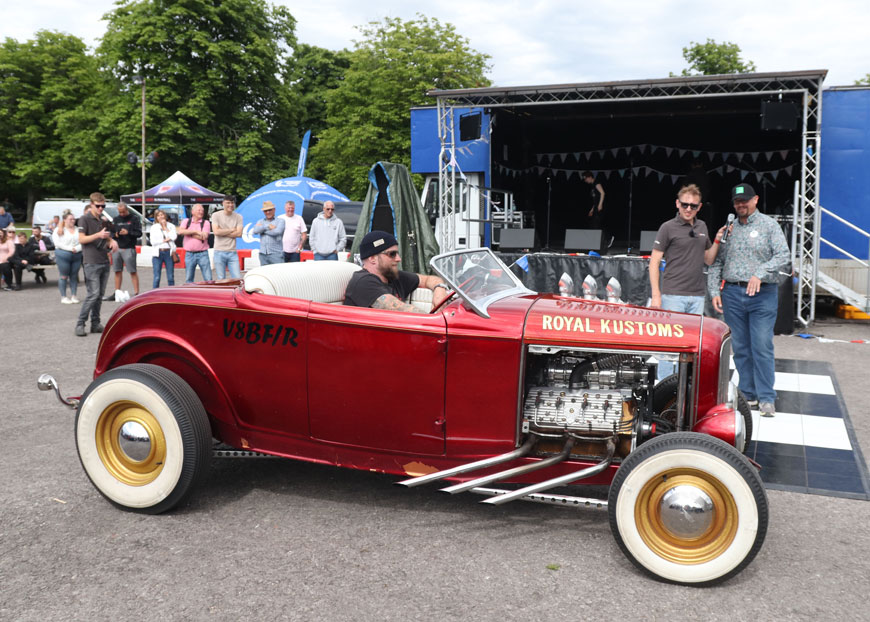 Jim Turnbull from Dorset won the Best Hot Rod Award for his stunning 1932 Ford Roadster. With its gleaming Flathead V8, Jim’s Roadster is equally at home on the street as it is on the drag strip. Jim said: “I’ve done a lot to this, as I’ve had it for 32 years. I just use it, abuse it, and fix it – I just love it.” 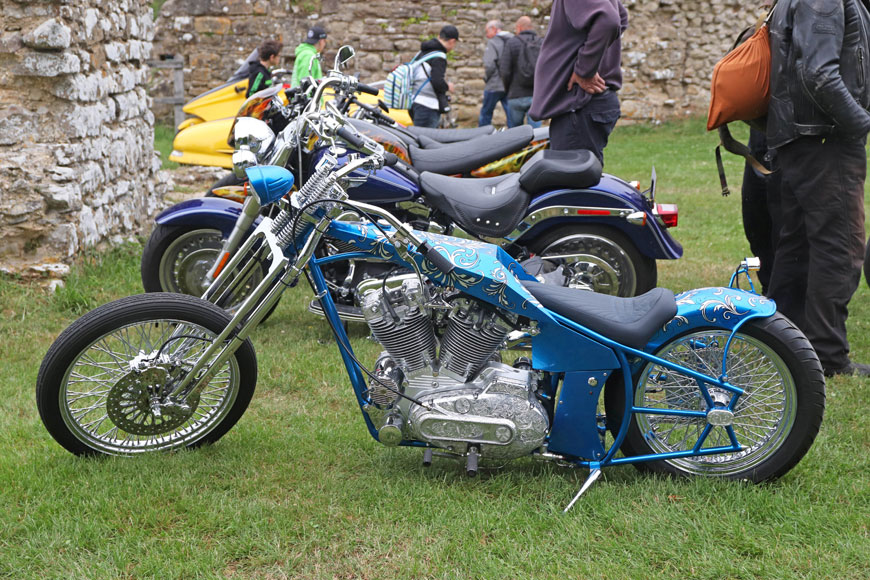 Winning the Best Bike Award was Martin Bradbrook from Shaftesbury, for his impressive Harley-Davidson Ironhead 1000cc Special, named ‘Moody Blue’. Martin said: “She’s called Moody Blue because she’s blue and very moody! It’s a complete custom one-off, I’ve hand-built the whole thing, including the frame, fuel tank, handlebars, seat and exhaust, while all the engraving was done by expert Don Blocksidge.” Presenting the award, the Chief Executive of the National Motor Museum, Dr Jon Murden, said: “I love this bike, with all the work that’s gone into it, it’s a work of art.” 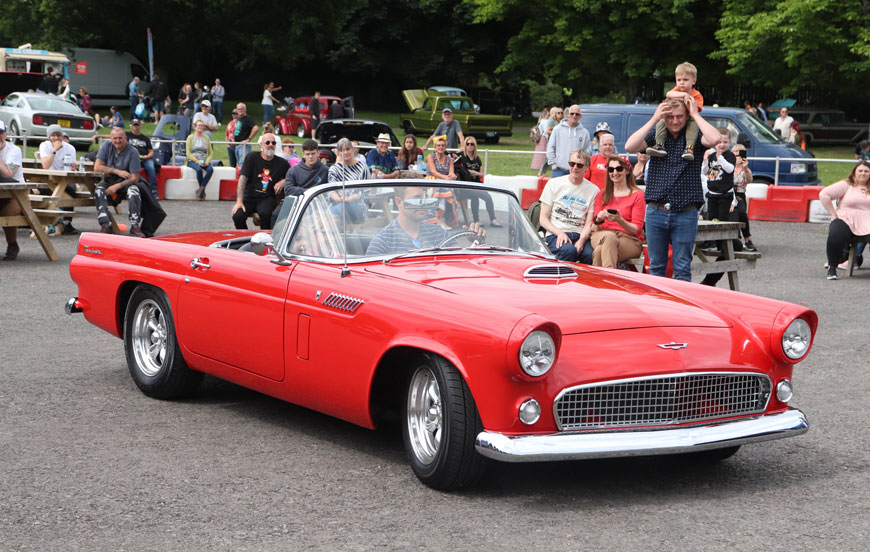 The vibrant red 1956 Ford Thunderbird belonging to Leigh La-Reservee of Poole was chosen for the Best Custom Award. Leigh said: “I’m dead chuffed, I only got it a few months ago as something to do together with my dad. I’m fairly new to the old classics, but we’re in the process of re-upholstering the interior.” While the gleaming 1967 Dodge Coronet of Michael Nash was the heat winner of Classic American magazine’s Car of the Year competition. As well as his trophy, Michael received automatic entry into the competition finals at the NEC’s Classic Motor Show in November. 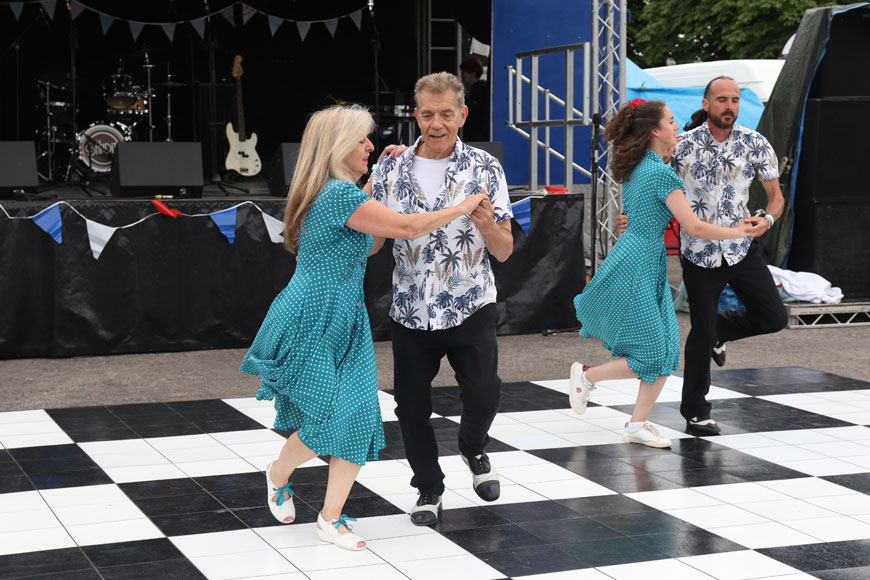 Throughout the day, The Bandits and Company B got showgoers’ feet tapping by performing rousing retro tunes on stage, while Jitterbug Jive offered how-to dancing demonstrations on the dance floor that everybody could get involved with. Vintage hair stylists offered retro styles, with face painting for youngsters. 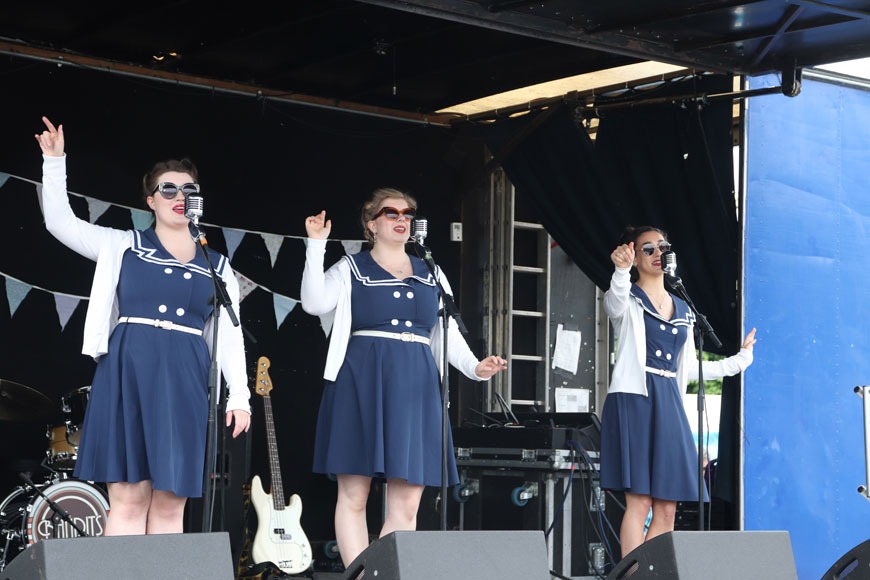 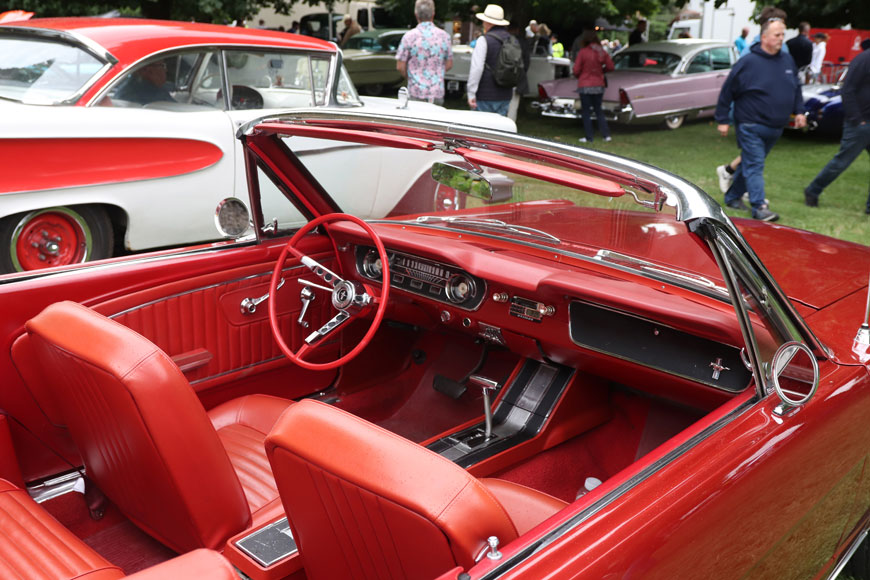 The Hot Rod & Custom Show is just one of the exciting motoring events at Beaulieu for 2022. For more high-octane excitement Beaulieu Supercar Weekend on 6th – 7th August is a must-see show, then find your dream classic car for sale at International Autojumble on 10th – 11th September. For Beaulieu’s full 2022 event calendar, click here.