This 800 year old Abbey was founded by King John in the 13th Century before being destroyed on the orders of King Henry VIII in 1538.

Owing to the efforts of the Montagu family ancestors, distant relations of these former kings, the now tranquil Abbey is a conserved ruin where generations of visitors have enjoyed its peaceful setting and appreciated the achievements of its medieval builders. 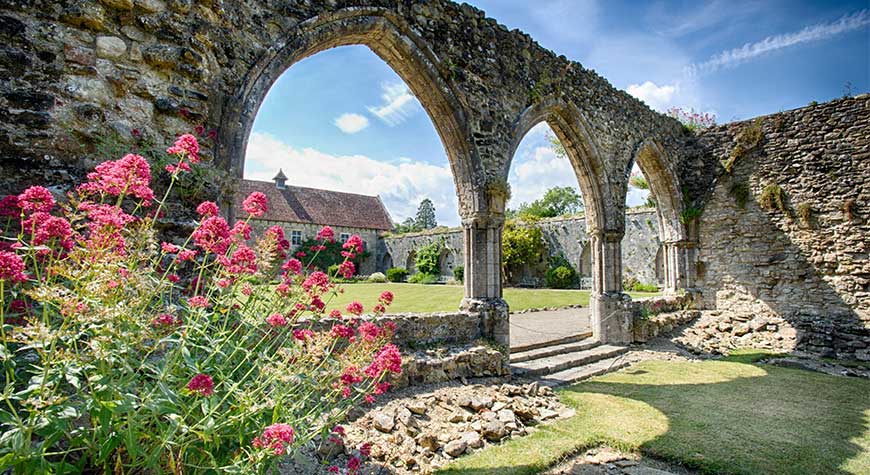 Walking through the preserved foundations of the Abbey Church provides an impression of the vast scale of what once stood here. The Cloister remains an oasis of calm and an ideal place to pause before exploring the remainder of the complex. It is also home to an aromatic herb garden once worked by monks for use in medicine and cooking. 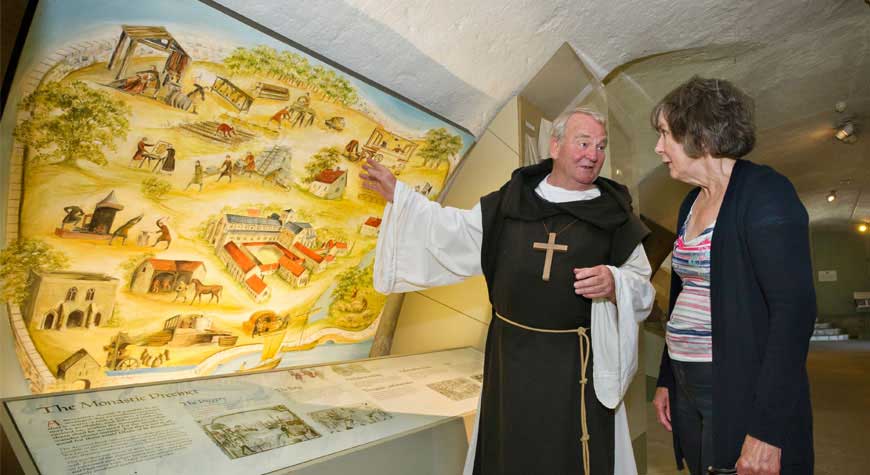 An exhibition in the surviving Domus building tells the story of this 13th Century English Abbey and the medieval Cistercian monks who gave their lives to the service of the church and the isolation of the New Forest. On the upper floor (which is occasionally closed for weddings and functions) you’ll find a series of embroideries designed by Belinda, Lady Montagu which depict the history of the Abbey. 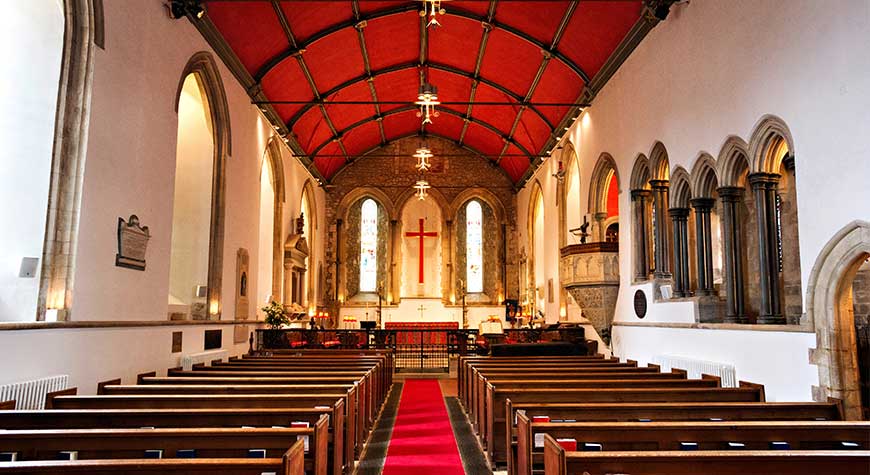 Another surviving building, once the Monks’ Refectory, has been the Beaulieu village parish church since shortly after the Abbey was destroyed. It is now a popular venue for weddings and visitors are welcome to enter when services are not taking place.

Please note: The Church is now open daily to visitors between 1pm and 3pm, subject to church services. 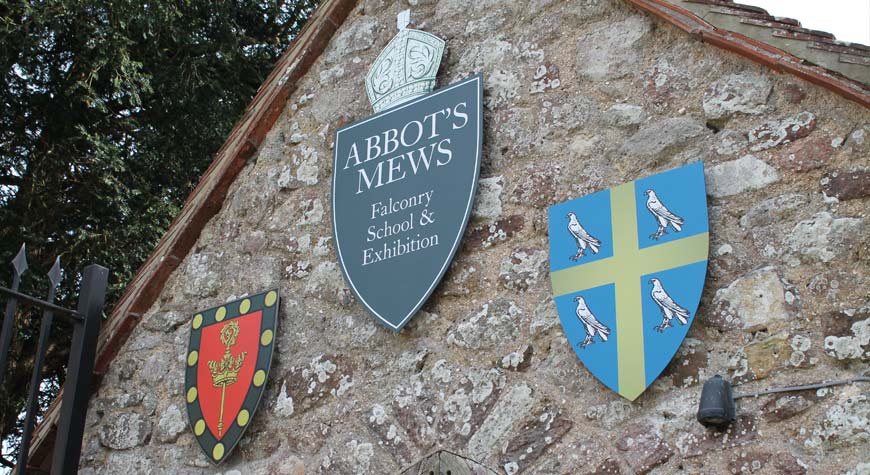 Lord Montagu’s Falconer, Paul Manning will be offering Exclusive Introductions to Falconry at Beaulieu on selected mornings. These are for private One to Ones or small family groups. For more details and to book, please call 07747 604634.

Learn about the story of falconry on the Beaulieu Estate in this fascinating exhibition. If you visit during special holiday periods you might even be lucky enough to meet Lord Montagu’s falconer. 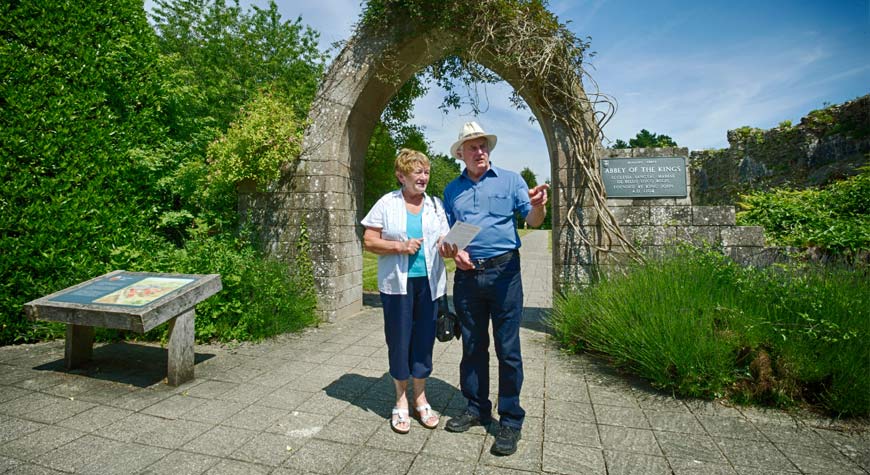 Itineraries: Plan Your Day Out

To help you make the most of your visit, we’ve put together some suggested itineraries with hints and tips to help you plan your day out at Beaulieu.

A BRIEF HISTORY OF BEAULIEU ABBEY

The Beautiful Place of the King

Beaulieu Abbey was founded in the early 13th century and soon after its completion it was given the name of Bellus Locus Regis, or the beautiful place of the King, in reference to King John’s role in the foundation of the Abbey. The King had quarreled with the Cistercian Order early in his reign and decided to establish an Abbey to atone for his past oppressions.
Legend tells that King John decided to donate the land to the religious order after he had a particularly unsettling nightmare where he was beaten by a group of monks. But there was another reason behind his generosity – in return for his gift, the King became the object of prayers in every Cistercian monastery.

For approximately three centuries, the Abbey was a serene place for Cistercian monks who visited from France and other parts of England. Beaulieu flourished under the Order, thanks to their involvement in developing farming and wool production techniques, helping produce items that were highly coveted by merchants from all over Europe. Cistercian monks were also remarkably skilled herbalists and tended medicinal gardens within the Abbey’s grounds – these still exist today.

The Abbey’s strength as a religious centre continued to grow until the 16th century, when Henry VIII launched the dissolution of the monasteries. The Abbey and surrounding estate were sold to the Earl of Southampton in 1538 for the princely sum of £1,340.
The government issued orders that the religious buildings should be destroyed beyond the possibility of restoration. The Abbey Church, Cloister and Chapter House were sadly demolished, but the Refectory, Domus and two Gatehouses were allowed to remain as long as they were converted to secular use.

Over the centuries, Beaulieu Abbey’s splendid silhouette has inspired poets and writers and the Abbey has become a key part of Hampshire’s historic and cultural heritage. Nowadays, the allure of this fascinating historical building remains and offers visitors an opportunity to step back in time and admire its scenic beauty.
A visit to Beaulieu Abbey can provide unique insights into medieval England, and the picturesque setting is ideal for anyone looking to spend a historical day out in the New Forest.

The abbey was breathtaking!